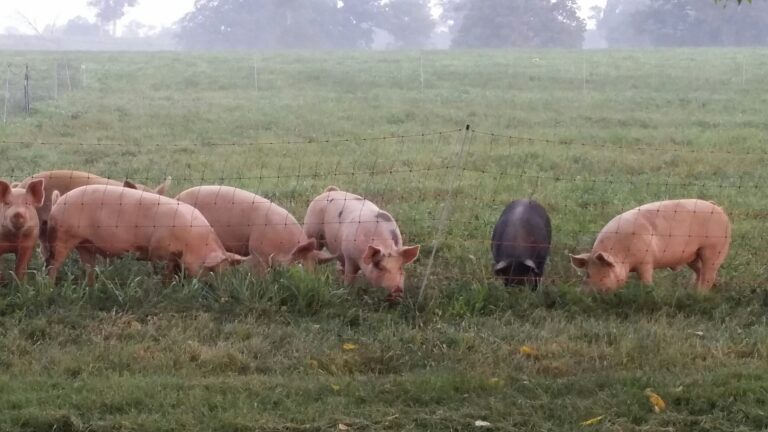 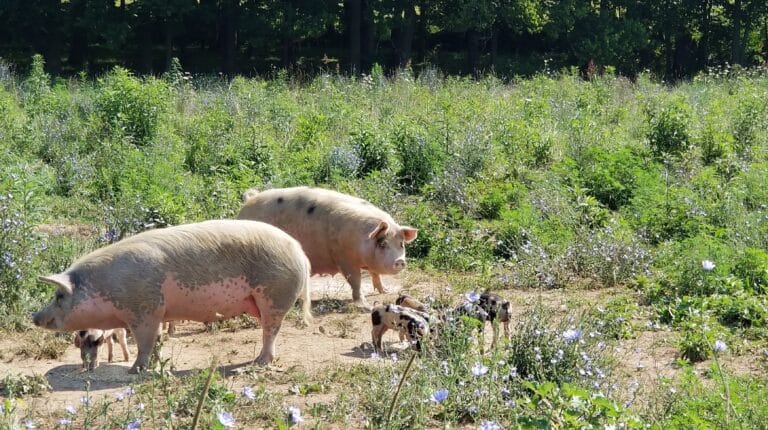 While Elmwood Stock Farm has long been known for its organic, grass-fed beef and organic produce, organic pork is a newer offering. In the spring of 2016, we began rotating a group of organic hogs through our pastures and watched, waited and cared for them with anticipation. We knew raising pigs organically would be challenging. Why else would so few local farms be offering organic, pasture-raised pork?

We are happy to be outdoor-hog farmers and pleased with the benefits the pigs offered to our holistic farm system—so much so that we’ve expanded our pig population each year and are now breeding our own. Each female pig (called a sow) will have a litter of 10 to 12 piglets after a gestation period of three months, three weeks and three days. Piglets are weaned a few weeks later, then rotated as a group through the pastures.

Under USDA certified-organic regulations, our pigs are kept on organic pastures, which are never treated with synthetic, chemical fertilizers, pesticides or herbicides. In fact, the only fertilizers our pastures are ever treated with are those that come directly from our animals. The pigs are given room to roam, root in the dirt for tasty snacks and build mud holes. They are fed a ration of organic grains—which are non-GMO—and minerals and are offered an unlimited supply of clean drinking water.

Our pork inventory tends to run in batches, often selling out in between. If we don’t have the specific cut of pork that you’re looking for, check back or inquire with us about our expected restocking schedule.