Curious about wholesome, organic foods? Place an order and see for yourself!
Menu
$0.00 Cart 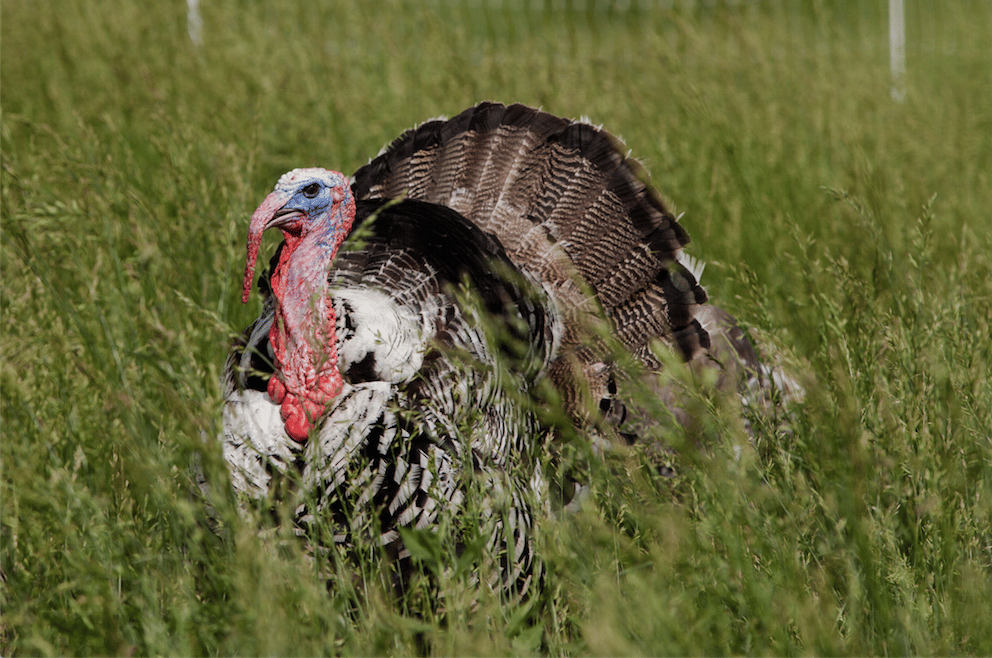 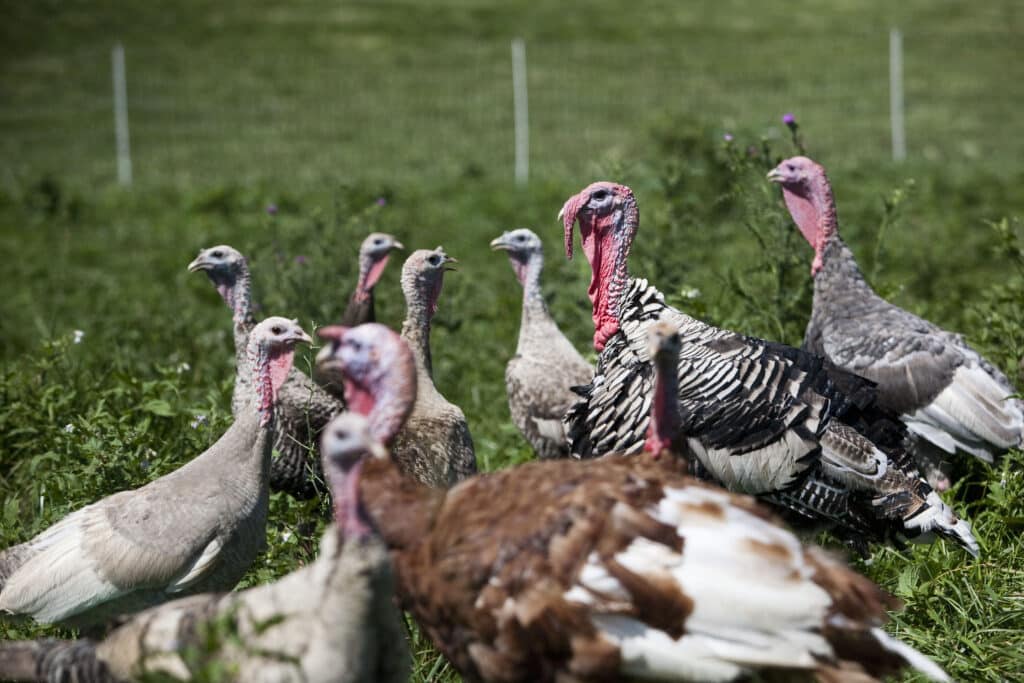 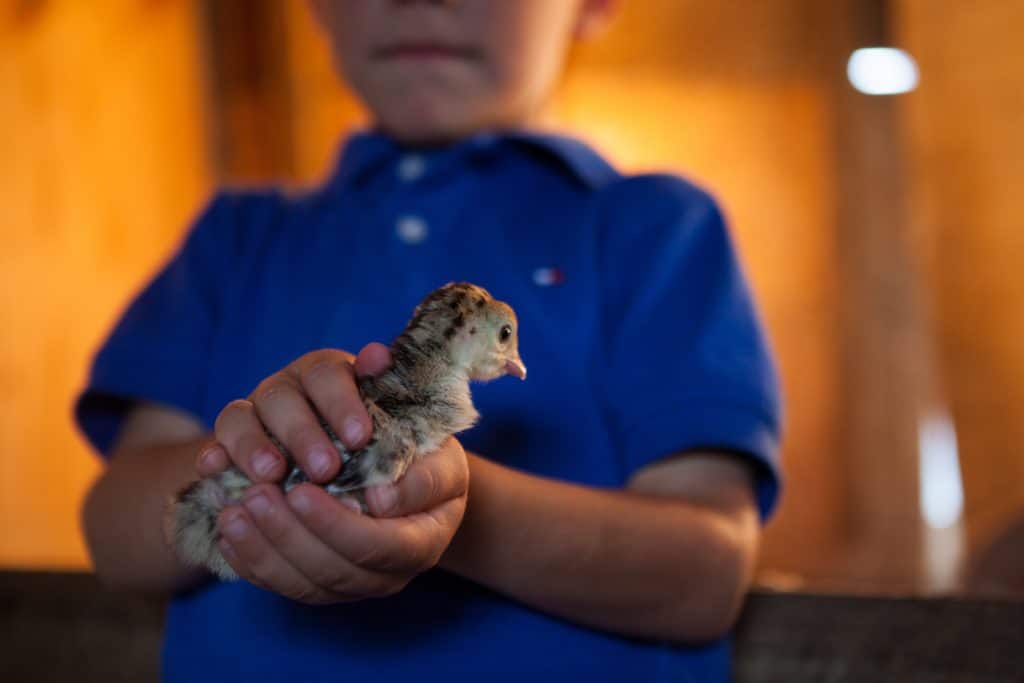 Turkey is a traditional food at fall and winter holiday meals, and you can enjoy this favorite meat year-round from Elmwood Stock Farm. We offer two types of organic turkeys—heritage breeds and broad-breasted—both raised on pasture using USDA certified organic standards. Keep reading to learn about the difference between them.

Our turkeys are free ranging, kept outdoors on grass pasture and fed wholesome, organic grains, resulting in moist, flavorful turkey without the use of synthetic inputs, flavor additives or stimulants. The use of certified-organic grain along with the time and care it takes to raise turkeys outdoors on pasture means our turkeys are more expensive to produce, but you can take comfort knowing no antibiotics, no GMO grains and no synthetic chemicals are used to produce your food. USDA organic certification ensures third-party verification of our production practices and ultimately results in better health for you, your family and all the guests around the table.

The Spruce Eats named Elmwood Stock Farm turkeys one of the 11 best mail-order turkeys, and the Best for Large Gatherings.

From TheSpruceEats.com: “Whether you’re dishing up one extra-large bird or prefer to cook a few smaller ones instead, Elmwood Stock Farm has what you need.”

SHOP ONLINE
TURKEYS IN THE NEWS 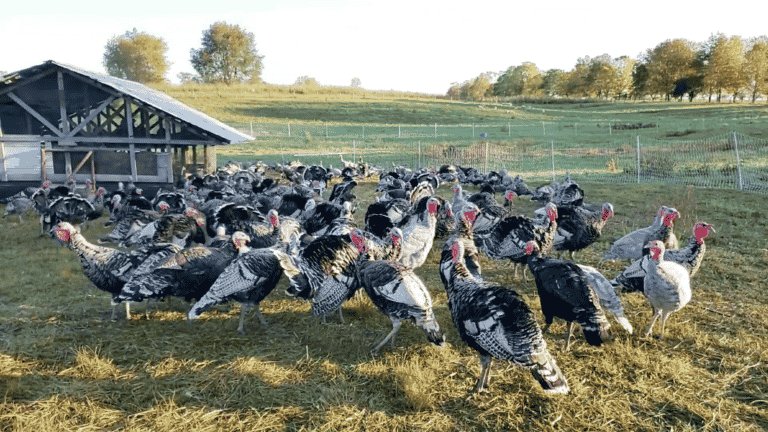 Elmwood Stock Farm is involved with breed-conservation efforts for Narragansett and Slate heritage-breed turkeys and is one of the few farms in the country to produce heritage breed turkeys that are USDA certified organic.

We hatch our own heritage turkey poults on the farm. They emerge from their eggs in incubator, move to the brooder barn for a few weeks, and spend the rest of their time here on pasture. The young turkeys are a joy to watch and behave surprisingly different than their chicken cousins.

Elmwood Stock Farm’s heritage-breed turkeys were “Recommended” in a Cook’s Illustrated taste test. Ours is the only organic turkey to receive such a distinction from the magazine.

From Cook’s Illustrated: “This turkey was ‘super tender and juicy,’ with white meat ‘so rich in flavor that it tastes like dark meat.’

“The dark meat was even more tender and flavorful, prompting one taster to ask, ‘Is this dark turkey or pulled pork? So fall-apart tender that it’s almost shredding itself.’

“‘Rich without gamy notes,’ the meat had a ‘texture like velvet.’”

A heritage turkey is not of one particular breed, but made up of a group of breeds. At Elmwood Stock Farm, we care year-round for our own breeding flock in order to raise Narragansett (the oldest-known American turkey breed), Slate turkeys (found on Slow Food’s Ark of Taste, which promotes the survival of near-extinct foods), and a few Bourbon Red turkeys (named after neighboring Bourbon County, Ky.).

Some characteristics that distinguish these rare heritage turkeys from the broad-breasted variety are slower growth, more proportionate breasts to legs and the ability to naturally breed. They are naturally smaller birds with a slimmer, longer shape (not round, like grocery-store varieties that are bred for fast growth). There is a better balance between the dark meat and white meat, and the meat has a richer flavor. The skin may also be a different color than the near-transparent white of commercial birds, as skin color is related to feather color, and heritage breeds are beautifully feathered in a variety of bronze, black, brown, gray, white and red colors.

Learn more about heritage turkeys and the efforts to raise public awareness about them through The Livestock Conservancy. 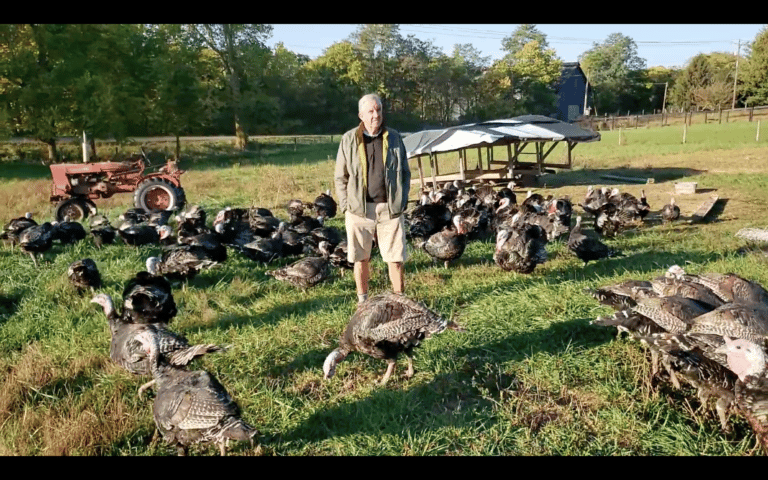 Broad-Breasted Bronze turkeys are similar in size and shape to a supermarket-purchased turkey, but the similarities end right there! Every Elmwood Stock Farm turkey is raised outdoors in our pastured system that provides a diet enriched by grasses, fresh air, adequate exercise and sunlight. Our bronze feathered turkeys free-range on fresh green grass or clover pastures supplemented with wholesome organic, non-GMO grains, resulting in moist, flavorful turkey.

We hear our ground turkey is more moist and flavorful with a firmer texture than typical grocery store ground turkey, and we think we know the reason. The ground turkey that you purchase from Elmwood Stock Farm is all breast and thigh meat from our organic, pasture-raised birds. On the other hand, the ground turkey that you purchase from the grocery store is the leftover meat that’s been “mechanically separated” from the turkey carcass—essentially the leftover bits after the turkey is deboned. So not only is Elmwood Stock Farm’s ground turkey more moist and flavorful, it’s also more wholesome turkey meat, and responsibly raised turkey meat at that.