Is This Organic or Non-GMO?

There is a lot of hype about food labels and farming practices, and with so many labels out there, it’s important to know the difference between them. We often have conversations with customers and CSA members about our production methods, and we’re still surprised by the amount of misinformation that we read in the media or overhear at the farmers market.

Everything we produce at Elmwood Stock Farm is certified organic. (Mac wrote about the organic-certification process in the CSA newsletter earlier in the season.) Our production practices go deeper than what any food label can define, however.

There are environmental, ethical, health and economic considerations to weigh when purchasing a package of “natural” pork, a dozen cage-free eggs or a bag of non-GMO-certified tortilla chips. Here are some truths behind these labels: 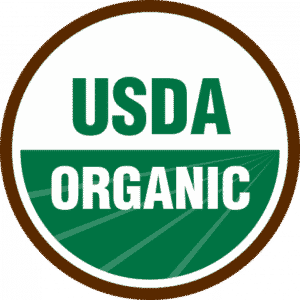 You can argue that all food is “organic,” in that it essentially comes from a carbon source. To be certified organic is entirely different, and that’s what organic food or farming actually refers to. The U.S. Department of Agriculture regulates the term organic, reserving this label for farms that follow the National Organic Program standards. USDA ensures their standards with third-party inspections, a required Organic Systems Plan for every organic farm and an annual review of farms’ records. Organic farms are not permitted to use synthetic substances or GMO seeds, feeds or other materials. Organic animal production follows humane-treatment, animal-housing and animal-welfare standards set forth by the government, as well. (You can view USDA organic standards online and learn more about what it takes to become certified organic.) Farmers and manufacturers that claim to be organic but are not can face fines and penalties that are not to be messed around with—up to $11,000 per violation.

The U.S. has no mandatory GMO-labeling law in place, though 64 other countries do. On July 1, 2016, all food products containing genetically modified ingredients that are sold in Vermont must be labeled as such. This simple law in this small state has caused a stir that is making news around the world.

GMO-labeling opponents believe consumers will be confused by the label and will automatically dismiss this food as unhealthy without educating themselves about what the label actually means. On the pro-GMO-labeling side, people are pleased they’ll finally know how their food is actually produced and will be able to make their own food choices. Whichever side you’re on, you can see that having a patchwork of random GMO-labeling laws for various states in this country is sure to lead to confusion—a national labeling standard would be preferred, but one has not yet been agreed upon by the powers that be. In the meantime, we can all benefit from Vermont’s law, as it’s hard for Campbell’s to manufacture a can of soup, for example, and be sure it won’t end up for sale in one state versus another.

This term is not mandated by any agency, so it’s difficult to know what standards “natural” food was produced using. Naturally raised meats and prepared foods often carry a higher price tag without offering the known benefits of an organic label. The Food and Drug Administration asked for consumer input about what the term natural should mean, but it has yet to release any kind of labeling guidelines. Until it does, your natural peanut butter can contain GMO oils grown with chemical herbicides, and the natural pork loin can come from a farm where pigs are confined to a building with metal floors and given low levels of antibiotics in their genetically modified, synthetically fertilized and toxically insecticided feed. (More about antibiotics in a minute!)

Poultry and eggs bearing this label were not raised in cages, but this does not mean they were raised outdoors. It’s possible they were still raised indoors with no access to fresh air, sunlight or turf. This label has no bearing on the potentially cramped living conditions, genetically modified and chemically sprayed feed, or synthetic-antibiotic programs of these animals.

Free-range could mean the animals—usually poultry—are raised indoors without cages, or it could mean they’re raised outdoors on pasture. According to the National Chicken Council, “There’s no precise federal government definition of ‘free range,’ so the USDA approves these label claims on a case-by-case basis. … Less than 1 percent of chickens nationwide are raised as ‘free range.’”

Sustainable Table points out studies that say free-range chicken has less fat and fewer calories than conventionally raised chicken; and eggs from pasture-raised hens have less fat, more vitamin A and more omega-3s. Our own experiences with lab-testing eggs from Elmwood’s hens show this to be true.

There are different grass-fed labels out there from the USDA, American Grassfed Association and others, though a meat doesn’t need to carry an official label to be grass-fed. In general, grass-fed animals eat only grass and forages, no grains. It is also possible to have grass-fed, grain-finished meat, where the animal eats only forages until the last few months of its life, when it is fed grains to speed up weight gain. We know there is confusion on this in our local markets, so asking questions of your meat farmer can help to clarify. Any farmer should be happy to explain the farm’s production practices to you.

There is a taste difference between grass-fed and grain-fed meats, as flavor is influenced by the variety in an animal’s diet. The Environmental Working Group says studies show that grass-fed beef has lower fat content; more omega-3 fatty acids; a better ratio of omega-6 to omega-3 fatty acids; and higher levels of vitamin E, beta-carotene and B-vitamins and conjugated linoleic acid.

According to Sustainable Table, studies have shown milk from pasture-fed cows has up to five times the CLA as milk from grain-fed cows. The website EatWild.com also lists a host of studies that outline the health benefits of grass-fed meats, eggs and dairy.

“Farm raised” is another label with a fuzzy definition. There is no legal guideline for farm-raised foods, rather it can mean any food that’s been raised on a farm. It’s possible you could be paying a premium for meats that have this label but the label doesn’t mean what you think. If you encounter this label at a farmers market, it’s worth it to ask what production practices are used so you know what you’re getting.

A package of meat with this claim assures the animals were not raised with the use of antibiotics.

Animals produced in concentrated animal-feeding operations—you know them as CAFOs or factory farms—are often fed low levels of antibiotics to prevent them from getting sick in their stressful, crowded conditions. These antibiotics find their way into the atmosphere and waterways. The Union of Concerned Scientists states, “An estimated 70 percent of antibiotics produced in this country—nearly 13 million pounds per year—are used in animal agriculture for these non-therapeutic purposes. This amount is estimated to be more than four times the amount of drugs used to treat human illness.”

This antibiotic overuse has an even greater effect on human health than it does on animal or environmental health. All of this antibiotic use is creating bacteria that are resistant to the antibiotics that are vital to improving and maintaining human health.

This and other local-foods labels refer only to where the foods were produced or processed, not what production methods or ingredients were used. In the case of Kentucky Proud, the raw agricultural product may have been produced elsewhere, but the food item qualifies if it was processed in Kentucky (Kentucky Proud coffee, for example). Foods produced, processed and purchased locally have a smaller environmental impact, as the cost and resources required to transport food across the country and around the world are significant. In some cases—beef, for instance—cattle could be raised in Florida, shipped to Wyoming to be finished in a feed lot, then sent to Oklahoma to be processed, and finally taken back to Florida to be sold in a grocery store.

The Fair Trade Certified label and other fair-trade-related labels are concerned with worker conditions surrounding the production of the food. These are especially prominent on food packages dealing with produce that comes from other countries, including coffee and chocolate.

Animal Welfare Approved, Certified Humane and American Humane Certified are a few labels that refer to the treatment of animals for the production of meat, dairy and eggs. These certifications are usually third-party verified, and each organization has its own specific set of rules.

By now, you know that we take our organic certification—but more importantly the production practices behind the certification—seriously. Part of using the organic label means food from Elmwood Stock Farm is not genetically modified (non-GMO), contains no artificial hormones or antibiotics, and is not produced using synthetic substances. Our beef is grass-fed, meaning the cattle never eat grain. Our eggs are cage-free and free-range—our chickens live outdoors, though most eggs bearing this label don’t come from chickens kept outdoors. And everything on the farm qualifies as “natural”—even though that word has no legal definition.

When you start really thinking about your food choices, you may become overwhelmed by all the ways in which food and farming are interlinked with the rest of the world. These food labels may just be words on a package, but the practices behind them really do have wider implications. As people’s interest in food sources continues to grow, food producers’ interest in capitalizing on them will, too. Some farming practices and food labels are little more than marketing schemes, so it’s important to know exactly what they mean. It’s actually best to just buy from someone you know whenever you can. If knowing your producer isn’t an option, at least look for USDA organic products. —Lisa Munniksma